You must understand the relationship of nominal level to the meters on your equipment.
Luke DeLalio 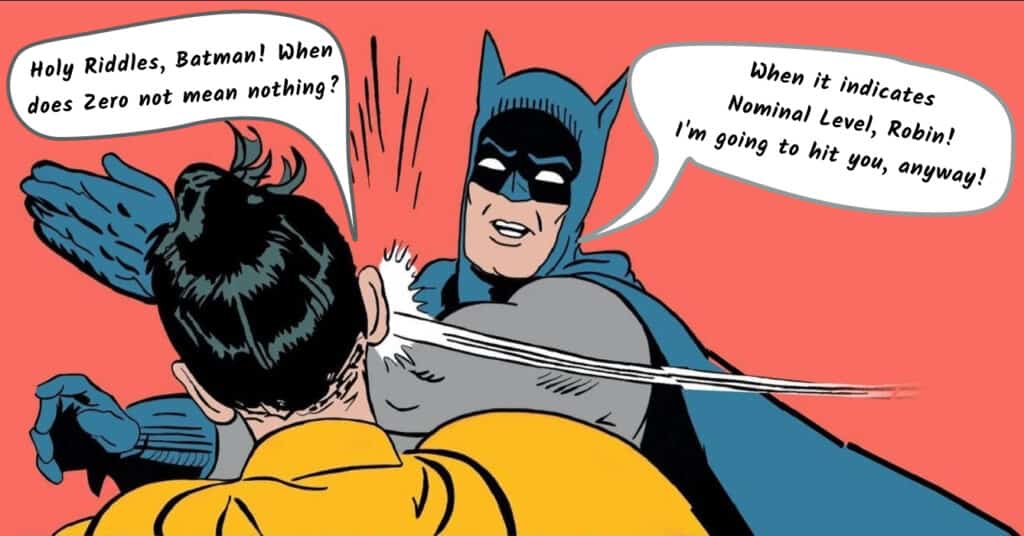 When last our heroes met they were discussing Dynamic Range and Nominal Level.

Dynamic Range is the space from the Noise Floor - the spot where the signal is covered up by noise (very very quiet) to the Distortion Point, which is the spot where harmonic distortion becomes very noticeable.

Nominal Level is a semi-arbitrary spot within the dynamic range of a piece of equipment that the manufacturer has decided gives you a high Signal to Noise ratio and enough Headroom. It’s based on their knowledge of the design of their equipment and conventions in the audio industry. What’s problematic about Nominal Level is that what is actually being measured can be different on each piece of equipment.

Manufacturers put meters on their products, and now is the time to understand how meters relate to nominal level.

SPEEDOMETERS and the VU METER

If you’re in a car in New York in the US, and you’re driving at the speed limit, your speedometer would look like this:

If you’re out west in Wyoming, the speed limit is higher, and the speedometer might look like this:

But you! You’re a crazy traveling’ bastard! Bit confusing if you’re driving in Wyoming at 70 mph, then NY at 55 mph, then you go to Germany and it’s not even miles per hour, it’s now kilometers per hour, then suddenly you’re in NY, speeding around on the highway and a Scorpions tune comes on and you have a flashback to Germany and suddenly you’re going 130 mph. A cop pulls you over, tasers your stumpy ass, etc. True story.

So, let’s say we invent the UNIVERSAL SPEEDOMETER. And it looks like this:

It doesn’t show how fast you’re going in some specific unit, it just shows you how far you are away from the speed limit, and it’s calibrated to wherever you’re driving. In NY,  we set the Universal Speedometer to “55” and if we put the needle at 0 we’re at the speed limit. In Wyoming, 0 means we’re going 70mph, in Germany 0 means we’re going 130kph. So, now, no matter where we go to drive, with the Universal Speedometer, we get the car up to the 0 and we’re fine. Who cares about the exact number in mph or kph because we know WE ARE AT NOMINAL. 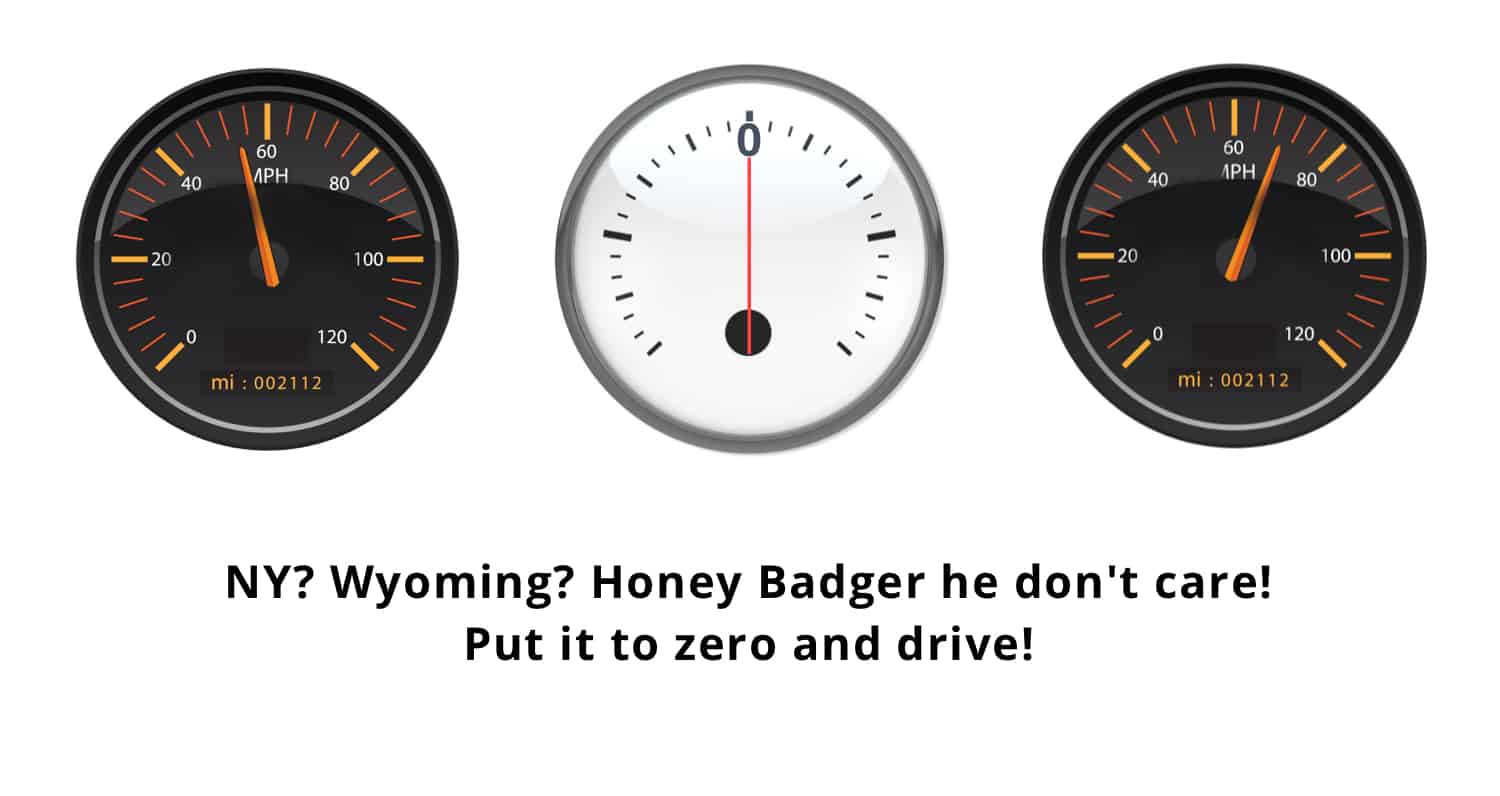 If we need to pass someone, we can speed up, the meter goes up, and we use up some of our HEADROOM to get better performance and speed and get around some car in the way. And if the meter is really low, we know we’re close to the NOISE FLOOR and driving too damn slow.

The Universal Speedometer is a VU meter. It doesn’t tell you what the nominal level is, it tells you something much more important, which is: Are you at nominal level or not. And as long as we slap a VU meter on all of our gear, we now know exactly where to park the level at: 0. 0 is nominal level.

And it really doesn’t matter what the meter looks like, if it’s LEDs or LCD or mechanical or virtual, nominal is nominal.

VU Meters and Average vs. Peak

Now, even though I sort of implied that all meters are the same they aren’t. It’s audio. There’s always something to fuck up the simplicity.

So, let’s say I’m in a room with the lights off. The room is dark. Let’s say I flip the light on for a split second and then click them off again. The room is bright for a moment, but then it’s dark again. So, it’s dark on average, but there was a “peak” moment of light. If I start flashing the lights on and off quickly, you might start perceiving the room as being “bright” rather than “dark,” because the AVERAGE light in the room across time is higher.

SO, if you are “set” to notice the average brightness of the room, you’ll respond one way, and if you’re set to notice “peaks” you’ll noticing something else.

So, how a meter responds depends on if it’s “noticing” the average or the peaks, or some sort of in-between.

VU meters are set to notice the average power of a signal. So, if you run something with a slow attack through it, like a violin or a guitar or a voice, or an entire finished song, the meter gives you a good idea as to where your signal level is at. But an instrument with fast transients, like a drum, the attack happens too quickly to be noticed by the meter. And by the time the meter responds the transient has already gotten through and it could be WAY above nominal and actually causing distortion, but a VU meter doesn’t tell you that.

A skill you had to have in the analog days was how to read the meters to get good levels on tape. As discussed, with slow transients, meters were more accurate as to level than with fast transients. So, I learned to cut drums to tape on the low side, know that the signal hitting the tape was actually +15dB or more above the meter reading. Vocals I would cut right at about nominal, because the vocalists I was working with were usually pretty consistent. I would cut bass right around nominal or a little higher, but if the bassist was slapping, the meter wouldn’t respond fast enough, so I’d set the levels a little lower than nominal.

With a softer song, I would actually cut the vocals hotter to tape - burn up some headroom to increase the distance from the hiss. And if I was working with a very unpredictable singer on a loud rock track, I might cut the vocals low on the meter to buy me some more headroom, unless I wanted distortion.

One thing I always did was smash heavy guitar parts into the tape. On playback they would sound huge and crunchy, and very solid - due to the tape compression. One time I was running everything so hot that the studio manager shut down my session because he thought I was damaging equipment. He brought the studio's tech in to lecture me on proper levels (I kid you not) and the tech proceeded to laugh at the studio manager.

If it sounds good, it is good.

Fast responding peak meters are tracking the transients of signals and are basically telling you how much headroom you’re using up. This is really useful information, but it’s different than what a slower meter is telling you. Both types of meters are really useful, especially together, which is why so often a VU meter has a peak light on it.

Meter Ballistics is how fast the meter responds. You can get an idea of this by looking at the meter. If it’s a mechanical meter and it has to swing a little needle around, even if it’s really fast it’s never as fast as an LED meter can be. But an LED meter might be electronically slowed down to respond like a slower mechanical meter - virtual meters on your DAW might be set to respond to average rather than peak, too. You can also look in the manual and find out if the meter is measuring peak or something more average (look for the letters RMS, which basically means "average.”).

Often, there are two meters within a meter set, and one is measuring the average power, and the other is measuring peak. When you're metering violins, which have slow attacks, you’ll notice that the two meters read very close to each other, whereas if you’re metering drums, there will be a much bigger difference between the two.

SO... now you know pretty much exactly what that meter is doing, and you know what nominal level is, and how this all fits together. Next week, we’ll talk gain staging and setting levels.

Thanks for all the good feedback. Much appreciated.