Engineers use terms like Distortion and Saturation almost interchangeably. This post discusses that, and offers ideas on how to think about this stuff while recording.
Luke DeLalio 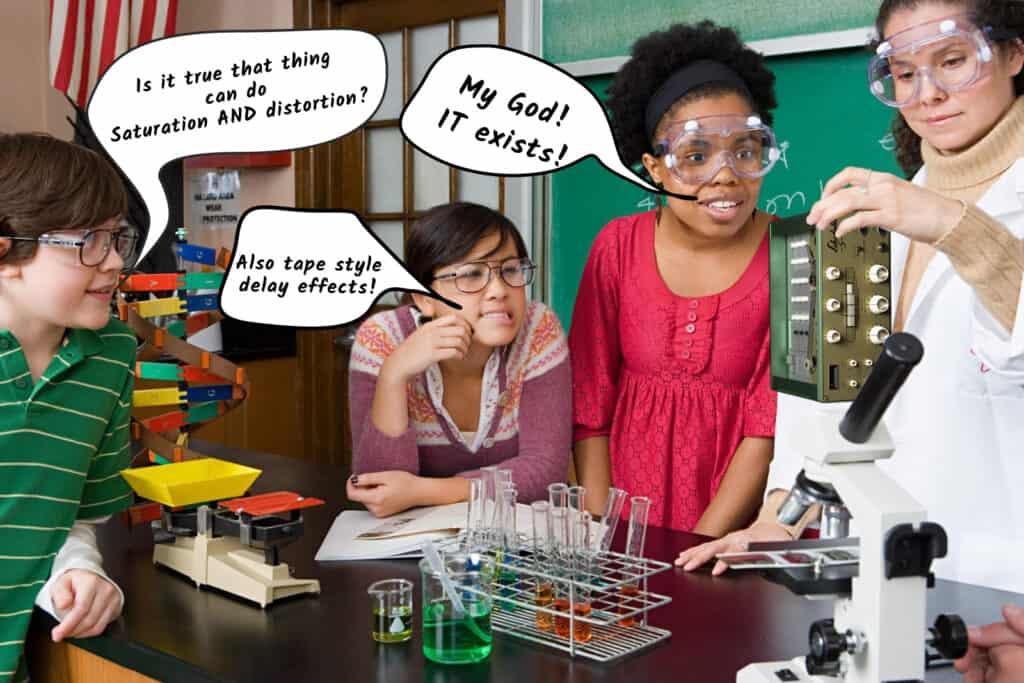 Oh my, we're jumping back to DISTORTION for a bit, and looking at what happens when you push a signal up, run it out of headroom, and generate harmonic distortion.

Isn't it cool that, if you've been following series of posts, that you understand everything I just wrote? It's also cool if you already knew all this stuff. Everything is cool. Even distortion is cool... if it sounds good.

As you know (and if you don't, go here) as we crank up the signal through a piece of gear and run it out of headroom, the gear loses its ability to reproduce the signal and the wave clips. That is, the peaks of it - the waves that are very high in power - are rounded off a bit. And if you're knocking off the high peaks of a signal, you are compressing the dynamic range of the signal. So, a side product of pushing a signal into the distortion point is some compression.

You've probably heard this whenever someone overdrives up a guitar amp. You'll notice that there's not a lot of volume difference between the softly played parts and the loudly played parts. Contrast that to a guitar amp that isn't overdriven: the quiet parts can be very quiet, and the loud parts really loud. Try this with a Fender Twin - you'll hear the loudest, utterly painful clear guitar parts, and you'll have to squint for the quiet stuff.

Compression occurs early on as you use up headroom, and it doesn't necessarily generate that much harmonic distortion. It will produce some, but it might be inaudible at first.

DISTORTION is NOT a COMPRESSOR

So, there is a compression of dynamic range when you have distortion, but it isn't the same type of compression that you typically get from a dedicated compressor.

But when you slam a signal into a tube or a FET or into analog tape, and get cause clipping, there is no lag. The transient doesn't get through, it is immediately squashed, at the speed of not enough electrons. There's also a very fast release when you're getting this sort of effect.

So, this type of compression is very different than that caused by a compressor. It can be very useful, actually, and you're very used to hearing it, especially on records from the '50s, '60s and '70s.

Saturation is a term that describes a physical phenomena: if you record very hot to tape the magnetic particles can't move any further, and that is called "tape saturation." Think back to 8th grade science class and making "saturated solutions" with that asshole Mr Frank who always favored the lacrosse players over nerdy fucking musicians like me. Uh... I digress.

Saturation is also what happens to transformers when a lot of signal is pushed through them and they become "saturated.” Here’s a topic for another post, I guess.

Increasing harmonic distortion adds upper harmonics, so a signal moving into saturation tends to get brighter, and the more you push in, the brighter it gets. And this is the big use of saturation and "saturators" these days, to make things a bit more present by adding brightness and... COMPRESSION, right? Because using up headroom and generating harmonic distortion adds compression. But not "compressor compression," right? It adds compression that's not punchie.

If you keep increasing the level, you'll keep increasing harmonic distortion, and eventually your ear will recognize things as sounding distorted. There isn't some spot where audio engineers agree, "Oh, that's gone from saturation to distortion." A classical engineer will hear ANY compression and saturation and call it distortion, whereas someone using saturator plug-ins might be drawing lines here or there. Someone like me, an old school analog engineer, will probably just record stuff and get it to where I think it should be and not give a squirrel's ass about what it's called.

In other words, the words are arbitrary. What's happening is this: as you turn things up, you reduce the dynamic range and add upper harmonics. That's what it all is.

WHEN DO YOU USE THIS STUFF?

All the time, I guess. I usually pushed drums into analog tape while recording to tame the attacks a little bit and "lengthen" the hits (more on that later). I would typically cut the kick kinda on the lower side, because I wanted as much of the punch of that thing as possible, but snare I would usually smush in quite a bit, and cymbals too. Hi hats... if I wanted them crisp - meaning lots of nice ticky ticky transients - then I would cut them on the low side. If I wanted to make them more sloppy (squesh the transient a bit) then I would:

a) cut them higher

b) cut them lower

If you answered a, you understand tape compression.

A basic way to think of using saturation/tape compression (or whatever this sort of thing might be called) is: Do I need this instrument to sound brighter? Do I need more punch out of it? Is it too punchy?

Realize that making it brighter by generating more distortion will typically nip off transients a bit. You're going to notice the loss of transients on faster things, not so much on slower things like vocals, guitars. As I wrote in last week's blog post, I used to always smush guitars into tape, and that was usually done to get rid of some of the transient activity so things weren't so pingy and whistle-like (the Insufferable Midrange Filter on the AIP hadn't yet been invented).

And that is it for this week. I had hoped to make you all a video, but my tinnitus is bad this week so it wasn’t to be.

Tinnitus, if you’re in audio, is a bit like getting in a car accident while driving. You might be very careful, and take all precautions, and you can still get hit. If you’re on the road, you can get hit. Honestly, with tinnitus, you can be miles from the road up in the mountains and suddenly a car can drop out of the sky on your fucking head.

Someday I’ll write a bunch of things on tinnitus, but for now I’ll say this:

2) Don’t go to ANY live gigs without hearing protection. It could be a concert of ants picking their noses. If it’s being mic’d, it’s too loud.

3) Get an SPL meter app for your phone and measure your environment. Note whenever you’re in a place that gets consistently above 80dB-SPL. Try to avoid those places, and if you’re stuck in one of them, leave as soon as you can - like within an hour. If it is louder, leave sooner. If it is above 100 dB-SPL, question why you are there in the first place.

4) Avoid earbuds like the plague. Never wear them on a train or in a car. This is like playing Russian roulette with a lawn mower.

If you have tinnitus.. I feel ya. Most likely it isn’t your fault, and beating yourself up won’t help. Feel free to write me - Luke @ Korneff Audio dot com. Remove the spaces and make the dot a dot. You’re not alone and there are some things you can do so life doesn’t suck.