You should get in the habit of labeling everything with a piece of Artists Tape and writing in block capital letters with a Sharpie.
Luke DeLalio 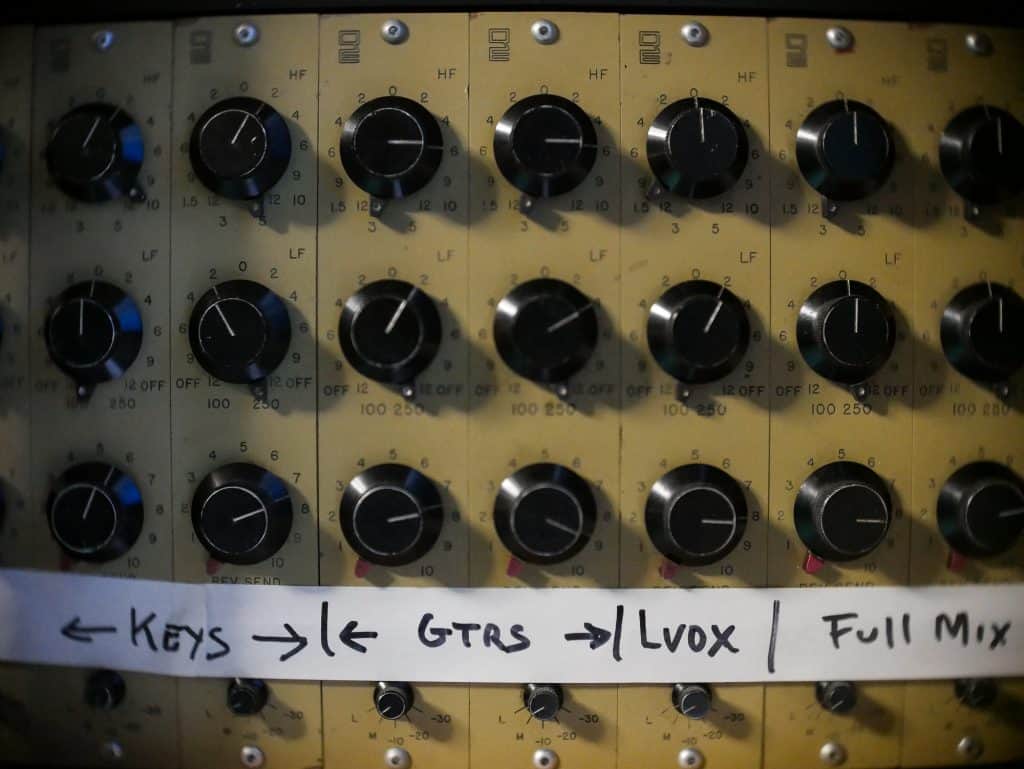 The What: Learn to write in block capitals and label everything.

You should get in the habit of labeling everything with a piece of Artists Tape and writing in block capital letters with a Sharpie. It will make your sessions run faster and cut down on the amount of time wasting (and session destroying) mistakes.

All your documentation should be written in block capitals: track sheets or track listings (if you hand write them or still use them), session notes, etc. Label your outboard gear so you know which track or channel is plugged into which compressor, eq, etc. Label anything that needs to be made clear and obvious.

Block capital letters are big and easy to read. When you first start writing them you might find they're a bit inconsistent, but within a session or two you'll develop muscle memory and your handwriting will get very uniform and even. If you have assistants in your studio, insist they write everything in block capitals. Your sessions will go faster when you're not trying to figure out someone's shitty handwriting. Your sessions will look tighter and more professional. Clients will be less inclined to dick around with your gear when it is clearly labeled.

As long as your letters are clear and simply, you don’t have to be religious about everything being capitalized. I write with a mix of caps and lowercase, but all my letters are simple, clearly written. If you can write everything with capital letter that's awesome, as long as you strive for neat and consistent.

Having everything labeled becomes really important if you're running your studio as a business, and especially if you're charging a block fee or a flat rate for your time, in which case you make more money if your sessions run fast and smoothly.

Ever sat at a session adjusting an eq and not hearing any effect, only to realize you’re adjusting the wrong damn eq which is patched into a totally different channel, and you’ve totally screwed up all the work you did an hour ago? I have."

A session with a bunch of musicians, perhaps a producer and an assistant, can be a really distracting thing. Especially when it is long, the night is late and everyone is tired from listening to music for hours on end. If everything is neatly labeled in easy to read handwriting, you eliminate those little, "Wait, what is this again?" pauses that happen when you have to switch your brain over from one activity to another. You also drastically cut down on mistakes that cost time, such as adjusting the wrong gain or threshold on a piece of outboard.

These days we have DAWs and it would be dumb to put artists tape on your monitor. However, labeling things, such as which vocal is plugged into which preamp, which track is running through which compressor, is still a really good idea. It makes for less mistakes and a faster session.

And if all your documentation is on the computer, then strive to be clear in what you name things on digital scribble strips, how you processed a particular track, chord changes, lyrics, whatever.

Another good habit to get into is having a Sharpie and tape with you all the time during a session. When I was freelancing in NYC I was always in a t-shirt, so I would clip a Sharpie to the collar (I stole this idea from super engineer Tchad Blake).  I'd leave rolls of artist tape around the studio, the control room, etc., so I could label something or write a note in any location in the studio. I made my assistants always carry a Sharpie. These days I still walk around with a pen clipped to my collar. Who wants to waste time looking for a damn pen?

A War Story or Two

I learned the lesson about writing clearly the hard way. I have awful handwriting because I have really loose joints in my thumbs. As a young engineer, back in the days of tape, my track sheets were basically unreadable. I would get bored and doodle all over the artists tape on the console scribble strip. My sessions went well, recordings sounded good, but overall, things looked like ass.

I had an overdub session one day at a studio that I was freelancing at for the first time. I was setting up the console, the 2" tape was on the deck, and there was a track sheet laying out. Another freelancer working in the complex walked in for some reason, looked at the track sheet, laughed, looked at me and said, "You write like a fucking moron, dude," and walked out.

In that moment I realized my engineering ability wasn’t being judged by the sonics of my recordings; it was was being judged by my handwriting. A total stranger thought I was a moron, because of my handwriting. Some other engineer might open up a tape box to remix something I had worked on, look at the track sheet, and assume everything on it was engineered like crap by a moron. And my name was on it.

No way was shitty handwriting going to shoot my career in the foot. I rewrote the track sheet and tore up the old one. I relabeled the console in big neat letters. Block capitals.

And after that... I found my sessions went faster. I made less mistakes. Labeling because especially important on long, 10+ hour sessions. I would tape out and label EVERYTHING and more than once this kept me from erasing a track by accident. Clean handwriting and labeling made a huge difference.

A few years later I was serving as the house engineer at a studio for a guest engineer, who was a Grammy winner earlier in his career. An assistant was putting on the master tape the guy had brought - 24 track analog 2” Ampex 456.  The test tones on the tape, essential to good tape deck operation in those days, were recorded in a half-assed manner. The assistant was struggling to get the deck properly calibrated. I looked at the track sheet. Really hard to read. Like a chicken trying to wipe dog crap off its feet. I said aloud, to no one in particular, "This is shitty engineering." I turned around and there was Mr Grammy, leaning over the SSL, adjusting something. He gave me a look. Whatever. I pulled out my Sharpie and made a nice, new, neat track sheet, and printed my name under his.

I have to write another column about maintaining situational awareness in the studio.

Anyway, for now, write in block capitals, label everything, and clip a Sharpie to your collar.

Shoot us a message if there’s anything you want to read in a blog post.

We have a cool surprise for you all in a few days!