How Not to Wreak Your Mix

Wanna wreak your mix? Spend a lot of time on one stupid aspect and lose your view of the whole thing. Read this to find out how NOT to do something that damn dumb.
Luke DeLalio 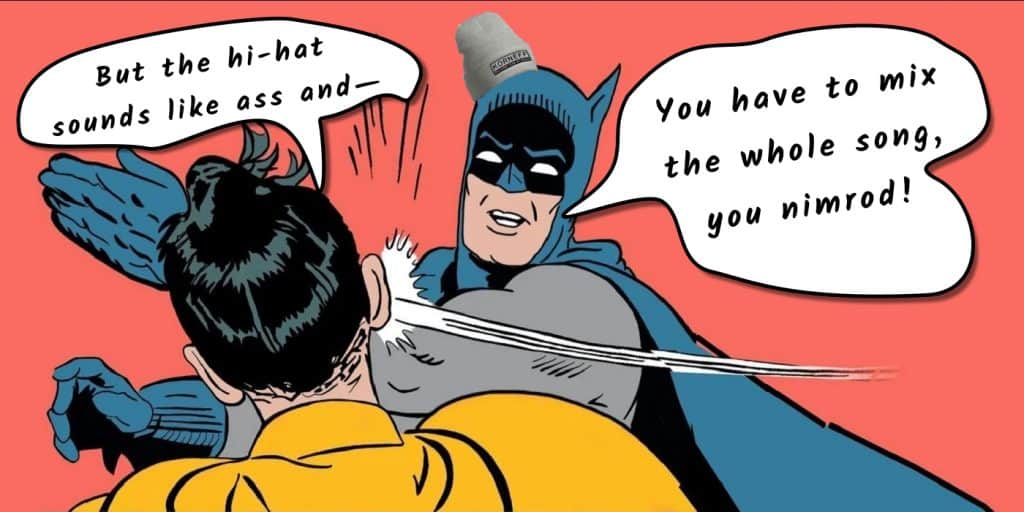 In the fall of 1991, I was mixing some big ass rock recording on an SSL console somewhere. I think I blacked out a lot of the details of this particular experience.

It went something like this: I’m mixing along, all is good, and in walks one of the musicians from the band. He leans over the desk and listens... and he remarks something like, “That hi-hat... it’s not quite right..."

Hi-hat hi-hat hi-hat... the more I listened, the worse it sounded. Like someone hitting a spaghetti colander with a metal spoon. EQ EQ EQ EQ EQ... now it sounds like ass wrapped in aluminum foil... EQ EQ EQ gate compress EQ EQ. Fader up, fader down... check the overhead tracks... GAH!!!! It sounds like shit there, too! What has happened? Who stole the beautifully recorded hi-hat that was on this tape and substituted this thing that sounded like metal baby turds??? GAH!!! Throw out the whole mix! Quit the career! Lock me in the vocal booth and suck out the air with a straw and leave me to die like a gasping fish...

I did a dumb thing. I focused on one element of a mix, and the more I worked on it, the more I mangled it and the rest of the mix. The damn hi-hat became the CENTERPIECE of the mix. I got obsessed with it.

I quit mixing for the night, made a quick cassette, and split for home.

In the morning, I listened to the cassette. The mix was ok. The hi-hat went back to being a just hi-hat. I went back to the studio, finished the mix off, and started on the next song.

I still don’t know exactly how it happened. I guess I was tired—probably 8 hours in on a mix or something. It's really awful to sweat through a mix over a fricken’ hi-hat. To spend an HOUR dicking around with a HI-HAT. What a dumb ass move. But I learned from it.

And I evolved a series of rules to keep me from falling down an obsessive hole again, to get better mixes in general, and, probably most importantly, to have a better experience mixing.

Now, the rules can be broken—sometimes you have to break them. They’re more suggestions then commandments, but try a few and see what happens.

How To Avoid This

1) Automate your mutes first thing if there is a firm arrangement. Then push up all the faders, and with NO SOLOING (and no effects or EQ), get your initial mix. Run the song from beginning to end. Mix EVERYTHING—every instrument and every section. Don’t touch an effect or a processor or an EQ (or solo anything) until you get something cohesive that makes sense.

2) Mix from beginning to end and not specific sections. I used to loop the tape deck and set it to autoplay, so I would work the whole song, have a pause as the deck wound back, and then work the whole song again. This keeps you from spending any more time than the length of maybe a verse working on any one element of the mix. You’re working on that guitar solo and OOPS! Over! You’ll just have to wait 'til it comes back 'round.

3) Set a time limit. Give yourself 20 seconds to work on a part or instrument, then move on. Go fast. Rule #2 generally makes spending too much time on any one element hard, but reinforce this by setting a limit. Set your phone to beep every 20 seconds. When it beeps, move on.

4) Try not to solo things, which is impossible (let’s be real), but do try to solo things in pairs or small groups. Working on the bass? Solo it, the kick, that low drone keyboard part and maybe the room tracks, and then perhaps work on that whole group, jumping from channel to channel, a little touch here, a little touch there. Think of groupings of sounds and instruments that occupy the same frequency range, and solo that group. Working on vocals? Make sure you have the hi-hat in there, any acoustic guitars, any keyboard pads. Instruments in the same frequency range will affect each other, so think of them and treat them as groups.

5) Round-robin your monitoring. Work for a minute on the near fields, switch over to something that sounds like a shitty iPhone, and then to a headphone, and then to the big monitors. Do this as the song plays from beginning to end. Break up the order of switching as you do this. Switch in pairs—listen on the iPhone, then on the bigs. Of course, don’t do this for the whole mix because you’ll drive yourself crazy. Maybe at the end of an hour, lean back and have a listen. Have the assistant randomize the switching of the monitors for you—they’ll feel important! 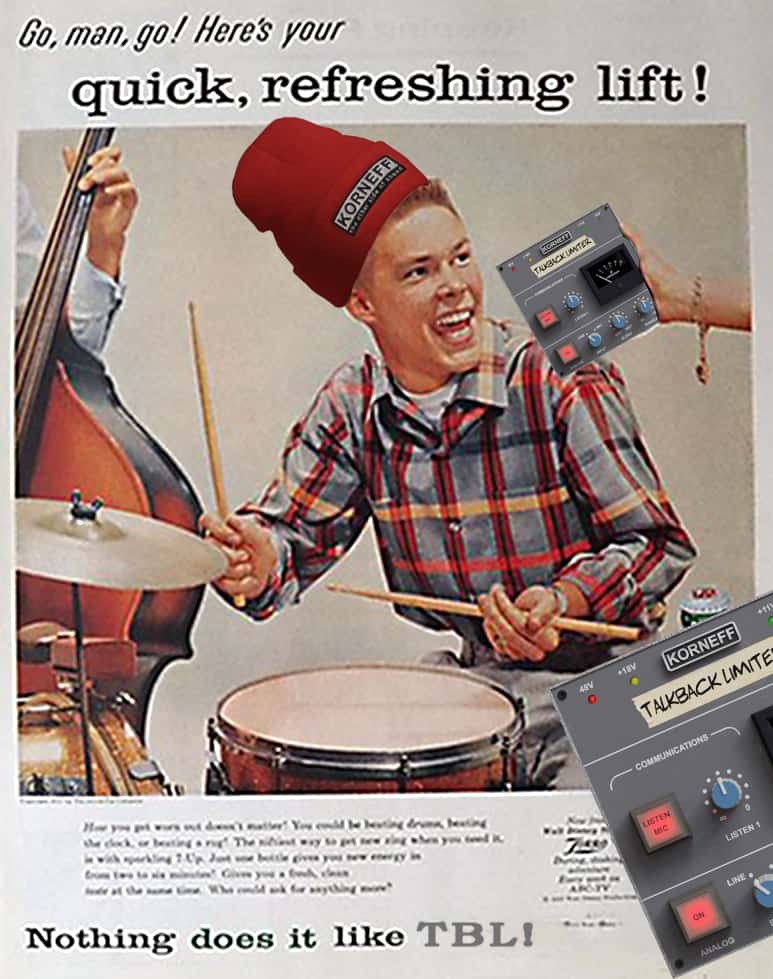 6) Fuck bleed. It probably isn’t a problem. Headphone leakage on a vocal is almost never a problem unless you decide to do an acapella vocal thing by muting out all the other channels of the mix, which is unlikely. Drum bleed is usually a non-issue unless you’re doing some extreme eq’ing and processing on something like a tom track, and somehow that is effecting the snare. Bring up the faders of all the tracks of the kit, balance it out so it sounds good. Once you chuck in all the other stuff of the mix, there’s going to be so much masking you won’t hear any bleed. Not always, but in hundreds of mixes, bleed was never an issue unless I made it an issue in my own dumb head. Go listen to a great live album like Rock ’n' Roll Animal or Donny Hathaway Live. Tons of bleed on these records that you’ll never notice, and they sound amazing. Don’t get hung up on bleed.

8) Be REALLY CAREFUL who is in the studio with you while you’re mixing. Choose your company wisely. Get the band out of the room, or out of the studio totally, if possible. I can’t emphasize how important this is. To do a great mix, you have to be in a really good headspace. The wrong comment at the wrong time can totally fuck you up. I used to tell my assistants that they weren’t allowed to say ANYTHING unless there was a technical issue or an emergency. And if I said anything positive—“This sounds good”—that they had to agree even if they thought it sounded like shit. AND if I said anything negative—“This sounds like shit”—they had to either shut up or say, “I dunno, I kinda like it.”

The band... it really is for everyone’s good that the band isn’t at the mix. The Beatles used to go to the pub around the corner from Abby Road. Encourage the band to go to the pub. I used to work out of a studio that was adjacent to a strip club. It was a great setup. Give the band a bunch of singles and get that mix done!

9) If you find yourself obsessing, or spending too much time on an element, STOP. Stop right there. If you can get away for a few hours, or even a day, then do that. If you’re stuck working because of a schedule, take a good break. When you return, if you’re still getting caught by the problematic track, mute it out—even if it’s the lead vocal or the kick or the bass (or the hi-hat) and work on something else for a bit. Let your focus widen to the rest of the song. Maybe tell your assistant (they can be handy, these assistants) to sneak the problematic track back in when they get a sense that you’re somewhat normal again.

There is no tenth rule.

Thanks for reading. Feel free to send a message.