What the Heck is Up With Transformers?

The physics behind a transformer are complex, but the effect they have is pretty simple to understand.
Luke DeLalio 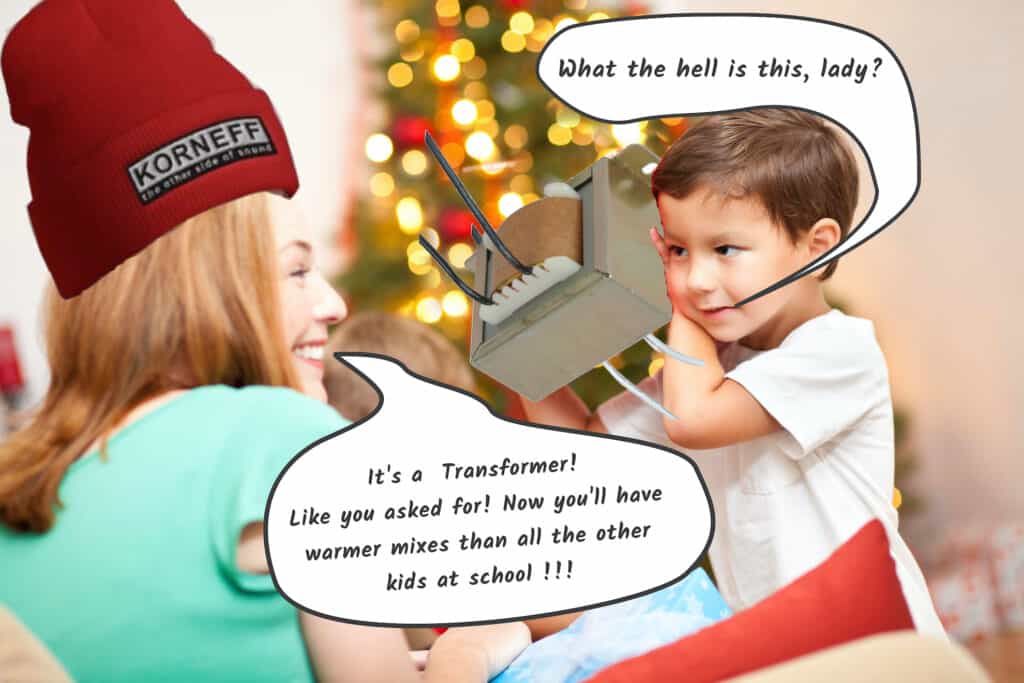 We are going to deal with transformers this week.

Transformers are incredibly common in audio gear, stuffed into everything from power supplies to microphones. Vintage EQs and consoles are loaded with transformers - four or more per channel, in many cases. And, or course, transformers have a huge effect on the way a piece of equipment sounds. A big part of, “That vintage thing” is really, “That transformer thing."

When electricity runs through a piece of wire, it causes some magnetism to happen. A way to think about this is electricity has current, and magnetism has flux. So, an electrical current running through a piece of wire creates magnetic flux. I don’t really have a good analogy for you on this... maybe... if you fill a balloon with air the ballon will bulge - the air is the electricity and the bulging is the flux. That kinda works. 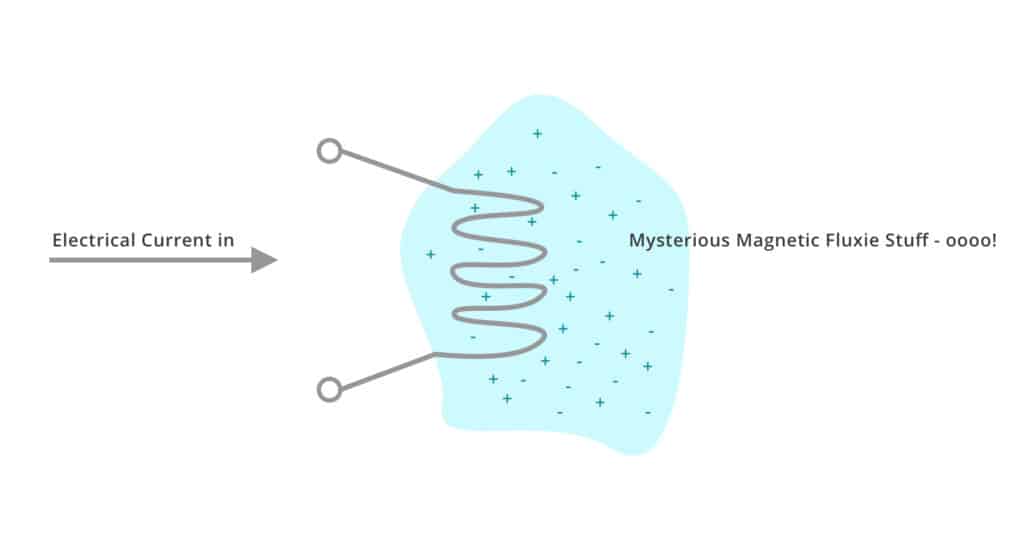 We can reverse the process, though. If we have magnetic flux happening somewhere, and we put wire near it, then electrical current starts flowing through the wire. To use my shitty balloon analogy: if we bulge the balloon, it sucks in air. 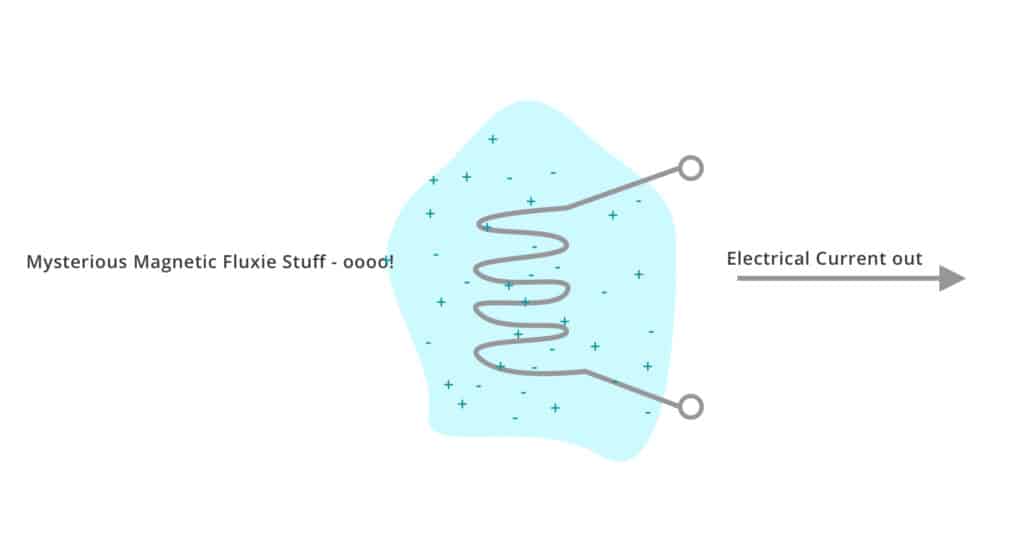 To make a transformer, we take a chunk of a ferrous metal, like iron, and make a kind of donut shape out of it. And let’s call that donut “the Core.” We wrap a bunch of wire around one part of the core and we feed electrical current into that coil of wire. We’ll call that first coil “the Primary.” We can also call a coil of wire “the windings.” Then, we wrap another coil of wire around the other half of the core - we’ll call that second windings of wire “the Secondary.” 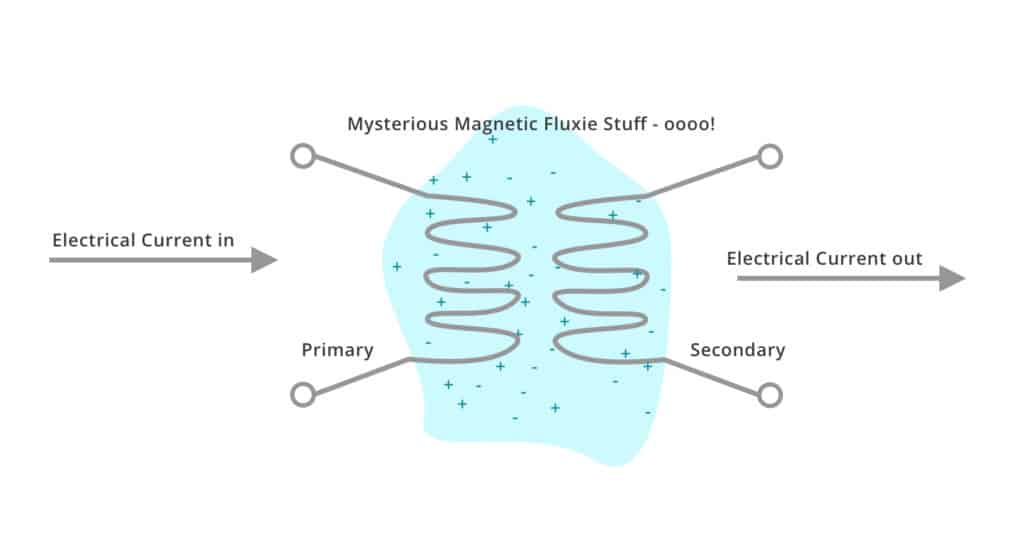 And here is what happens: We feed electrical current into the Primary, which causes magnetic flux in the core. The magnetic flux in the core causes electrical current in the secondary. SO... we feed electricity in, it gets converted into flux, and then re-converted to electricity. My balloon anthology completely fall apart here... like... we stuff air into a balloon and it bulges and it’s touching another balloon and causes it to bulge and the whole thing is vaguely sexual and let's not go there.

Why Do We Need to Do This?

There is a point to all this. First of all, there’s isolation. The current flowing through the primary doesn’t directly connect to the current flowing through the secondary, and in some instances, noise and crap on the primary side of the transformer won’t make it through into the secondary side of transformer. Obviously, when a transformer is used this way, it’s called an Isolation Transformer, and that’s pretty useful in audio.

Depending on how the primary and secondary coil relate to each other mathematically, we can use transformers to increase or decrease voltage (Step Up or Step Down Transformers), or change impedance (Impedance Matching Transformers), etc.

Look at that! A bunch of audio terms that you’ve probably hear around the studio and now you sort of know what they mean. Sort of like, “This Impedance Matching Transformer changes something which I totally do not understand, but it is useful and I run into impedance all over the studio... what the fuck is impedance?"

IT DOESN’T MATTER if you don’t know what impedance is for the most part. No one has ever put on a record and hummed along to the impedance. “My girlfriend loves the impedance on this record. And it reminds her of her now dead cat.” People don’t say this.

But, transformers definitely effect your audio engineering job, and the sound of your recordings, so for now, let’s deal with that. If you find this stuff cool, then please go research it more. Knowing stuff is its own reward. For now, don’t worry about how it works as much as how to take advantage of it when recording.

We do not need to know how to make tomato sauce to know the frickin' spaghetti needs some frickin’ red shit on it, godammit.

People describe transformers as sounding “Warm” or “Round.” Some people say they add, “Glue” or “Air.”

I find them “Smushy" and “Mooey.” You might find them “Flatulent” and “Anachronistic.” Whatever. Here’s what is happening:

Audio is an up and down waveform, that is to say, it swings from positive to negative. So, when an audio signal induces magnetic flux in the core, the flux swings from positive to negative analogous to the audio. But, the core sort of likes to stay magnetized a little bit. Meaning, that when the flux in the core is positive, it changes to negative a teeny weenie bit slower than the electricity changes. Now, this doesn’t sound like delay, but it tends to cause harmonic distortion that sits in the lower frequencies. If you think back to previous blog posts, whenever we discussed harmonic distortion, it happened in the higher frequencies. But, for transformers, even if the signal is low in power, the effect tends to center down lower. So, call this warm, call this fat, call this mooey... or call this the ramifications of magnetic hysteresis.

What the Hell Is Hysteresis?

You’ll see this word crop up on occasion, with transformers and often with noise gates. Basically, hysteresis as a concept means that the effect of the change happens slower than the thing that caused the change.

A fart happens, and a moment later everyone smells it and is grossed out*. The fart happens faster than the effect of the fart. And then, the fart, whilst finished as an event, lingers for a bit.

*Unless it is your own fart, in which case, you feel like sticking a flag in it and claiming it for the glory of Spain.

Now, transformers also Saturate, in the true sense of the word saturate.

The core of a transformer has a limit to the amount of flux it can handle, and when you reach that limit, the core becomes saturated. In other words, it can only handle so much magnetism before it can’t handle anymore. Once all the molecules in the core are “fluxed up,” no more flux can be added. As I described in previous blog posts, distortion is caused by a loss of ability. When the core is saturated, it no longer has ability to deal with peaks of waveforms that push beyond its capacity. Full up! No more! So, the peaks of the waveform get clipped, and a clipped waveform caused harmonic distortion. And, in the case of a saturated (clipping) transformer, the distortion is more like normal, clipped wave distortion — it effects the high frequencies.

As you slam more power through a transformer, you get more typical harmonic distortion.

Now, there is also... a sort of “slowness” to a transformer. I chalk this up to the hysteresis thing, but... to my ear, often gear with transformers in it sound slower and less precise to me. Less crisp, I use the word “smushy.” Smushy as in smeared and goopy. Like someone stepped on a cupcake. For that low-end kind of boost that transformers cause, I describe that as “mooey.” Mooey as in MOOO like a cow.

I wanted to make a video, but the reality is that it can be VERY hard to hear any effect of a transformer through YouTube after who knows what processing and stuff a video goes through. So, here is how you can experiment with transformers on your own.

Get a Korneff Audio Pawn Shop Comp, if you don’t already have one, by downloading a demo here.

After you install it, bring up a bass track on your DAW and add the Pawn Shop Comp as an insert.

Press the Korneff Audio nameplate to go around to the other side of the PSC.

The lovely and versatile PSC...

The transformers are located at the top in the center. You can switch between Iron, Steel and Nickel - these are the metals used in the transformer core. They have an effect on the sound because.... can you guess why? We’ve talked about it....

Each metal has different magnetic properties, so the hysteresis of each is different, and the effect on the sound will be different. In general, Nickel is affect the least by hysteresis, so it will have the purest sound. Iron tends to sound a tiny bit bright perhaps. Steel has the most pronounced low end bump and also seems the most “smushy."

Try switching between Steel and Nickel to catch the flavor of what makes the two different.

Now, hearing the transformer clip is going to be difficult, because there isn’t a dedicated “transformer clipping adjustment.” You can get it to clip by turning up the preamp gain, but there’s a good chance that you’ll also clip the tube preamp at the same time. That is, actually how it works in real analog life. 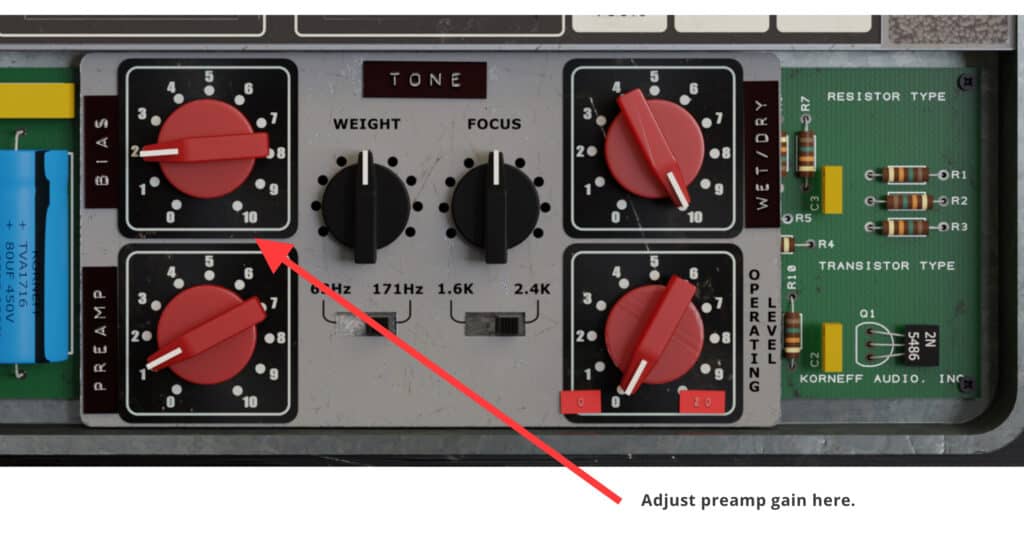 You see, back in the good old days, when people designed audio gear with transformers, they weren’t thinking, “Well, this will clip nice on a kick drum.” Nope. They were using transformers because that is what they had to use. And when they designed circuits, they were designing things to simply sound pleasant, not to necessarily clip a certain way, In fact, if you were to go back in time to talk to these guys and you said, “How does this sound if I clip it?” you’d probably get the reply, “Don’t clip it, you idiot. Why would you want to clip it? You want to blow it out? What the hell is wrong with you?"

It’s kind of like if you went to a remote indigenous village in the Amazon rain forest, and there were grass huts everywhere. And you said to one of the natives, “I like the grass texture effect on your hut. Tell me, what made you choose grass as a material for that?” They would look at you like you’re a freekin’ moron right before they shot your lumpy ass with blowgun darts envenomed with poisonous tree frog slime.

Remember, too, that the effect of transformers is typically subtle. Half the time I can’t really hear it. Now, I might like how something sounds going through a particular piece of gear, but I’m not thinking to myself, “Ah, the mellifluous dulcet warmth of a Carnhill VTB9049... sigh..."

Don’t worry if you can’t really hear it. No one ever says, “Turn it up! This is my jam, baby! Dig that transformer Hysteresis!'