Mistakes will be made, in the studio and in life. Get beyond them. They mean you’re moving up and forwards in your career. Learn the lesson now!
Luke DeLalio 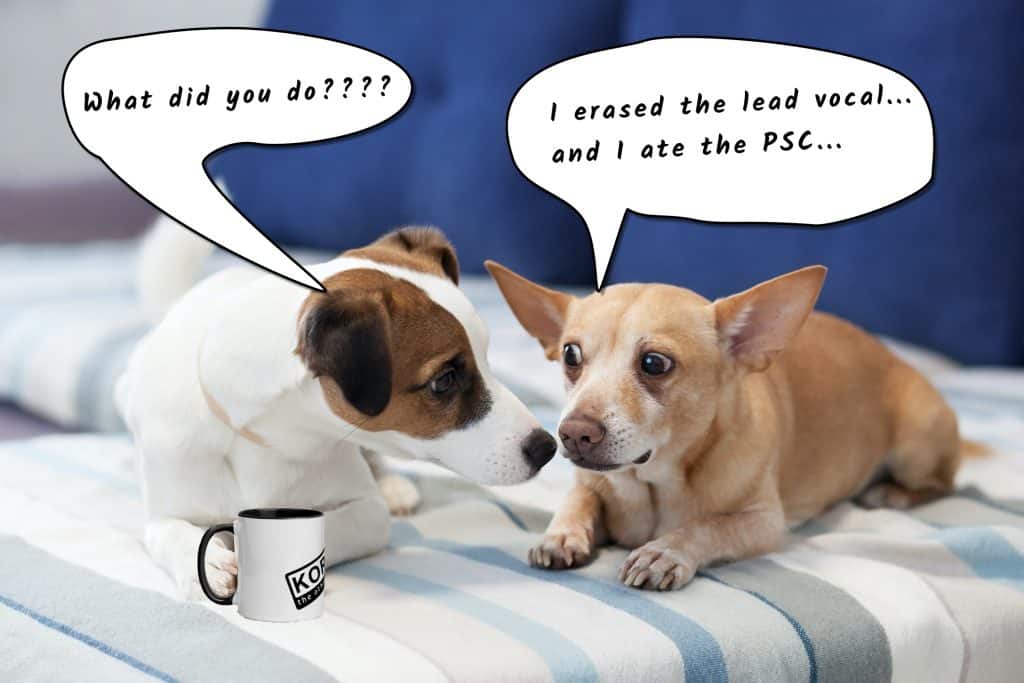 Last week, I managed to screw-up our email automation and bombarded a bunch of people with lots of emails. A minor screw-up, really. But it got me thinking about mistakes made in the studio and the best way to handle them.

You will definitely screw-up in the studio. You’ll erase something, or record it at the wrong rate and resolution, or spill a drink into the console, or say something dumb to a client, or knock over a valuable musical instrument, or snap the head off a microphone, or step on a mic clip, lose files, tapes, or backup drives, or completely forget a session and show up late or not at all, or record something like shit, or fall onto a tape deck... that’s a partial list of dumb stuff I’ve managed to do.

How you respond to your screw-ups is critical to your career. It’s critical to your business and personal relationships. Some of you are young and starting out; some of you are older and established. Screwing up and dealing with the ramifications never stops being an issue in life. I’m 57. I haven’t screwed up today yet, but it’s still before noon.

If you’re the lead engineer in the session, any mistake that happens is your fault. You’re in charge. Your job is to catch everything.

I was producing and engineering a session, and Steve, the assistant, rewound the tape after a great, final take of a song—it took hours to get this particular take—and then recorded a new song over it. He discovered the mistake about halfway through. He slid his chair over to mine, face bright red and tears welling in his eyes, and said, “I’m so sorry. I think I just recorded over the last song."

He went to hit the STOP button, but I grabbed his hand. “No, we’ll let them finish. Maybe they’ll get a good take of the next song,” I whispered to him.

The band didn’t get a good take. And regardless, we had to tell them we erased an entire song.

The band’s collective jaws dropped open and all their eyes went wide. Then, a remarkable thing happened. Steve, the assistant, spoke up:

“It was my fault. I was running the tape deck." A tear ran down his cheek.

The band was quiet. Then Mike, the lead singer, blurted out in his southern drawl, “Well, hell, son. I guess we’re gonna have to fire your ass.”

And then the whole band burst out laughing—we all started laughing. Hugs all around. Steve didn’t get fired. We redid both songs and put out an EP a month later.

Take responsibility if you screw-up. Just doing that alone will defuse any sort of anger or tension. Not always, but it works better than the next option:

When you screw up, you’re a screw-up. When you lie, you’re untrustworthy and dishonorable. How would you like to be labeled?

Lying might seems like a good idea in some situations. Maybe it’s a good idea to lie if the truth would really hurt someone’s feelings...

A: What do you think of my haircut?

Choose one or the other:

However, in situations involving your behavior and things you’ve done, lying is almost never a good idea. In fact, what happens is you get caught and the lie becomes a bigger problem than the mistake ever was.

My junior year of college I was the darling boy of the theatre sound department at Purdue University. I was defacto #2 to the department chair, Rick, as an undergrad, and was doing all sorts of cool work. I was also 20 and a dumb kid.

I was collaborating with another student on music for a play and we were behind in getting it done. I was also acting in the play and was exhausted from days of classes, nights of rehearsal, working in the studio until 5am, and then repeating that endlessly for weeks.

We were supposed to deliver a set of rough effects cues and music for rehearsal the next day, and we just couldn’t get it done. So, rather then just tell the director that—and she was nice and she would have totally understood—we decided to tell her the tape deck broke.

Dumbest lie in the world. The director, of course, ran into the department chair the next day, mentioned the broken tape deck to him...

Later that afternoon, I bopped into his office just to say hi. Rick was sitting at his desk. He looked up at me and said very, very quietly, “You lied to Marsha. A dumb lie, too. And after all the times we’ve talked about honesty... I’m so disappointed in you. Get out of my sight."

This remains one of the worst days of my life. I stumbled home to my apartment crying. I was devastated. Rick was/is perhaps the most important mentor I’ve ever had. To lose standing with Rick was awful. I still cry thinking about this almost 40 years later.

I had to apologize to Marsha and Rick, and regain their trust. I had to walk around campus, live life, and complete the rehearsal and run of the play, all while feeling simply awful about myself. Looking back, I still can’t understand why I lied, and older me says to younger me, “Dude, get over it.”

The only reason I can say that now is because I eventually did get over it. I got over it, Rick got over it. Marsha got over it. But the lesson stuck. I’ll NEVER get over that lesson.

It's important to forgive yourself after a screw-up. We often hold ourselves to much higher standards than someone else would, and we beat ourselves up. We relive the mistake or the problem, play it over and over again in a tape loop in our heads, giving it all sorts of energy and power. Meanwhile, the “victim” of the screw-up—the band, the singer, the boss, our partner—has forgiven us and has already moved on.

But we can tend to hang onto the mistake. Thanks to that, we’re off our game, we make more mistakes, and feel worse and worse, the shit becomes a death spiral.

So, damn. Forgive yourself. If you’ve been forgiven, then let yourself be forgiven. If you haven’t been forgiven, but you’ve taken responsibility, then you’ve done all you can. Move on. That’s it.

Easy to write about, but hard to do. I have no formula here—I still walk around for a day kicking myself sometimes. But, perhaps the next thing might be a help...

You seldom screw-up common place things you do everyday. Most people don’t take a dump and somehow manage to break the toilet and flood the bathroom, right? Or make a peanut butter and jelly sandwich and stab themselves in the eye. There can be accidents in common situations, but generally not screw-ups of thinking or behavior.

So, that means most of the time when you are screwing up, you’re in a new and unfamiliar situation, and that’s good. It means you’re getting somewhere. Perhaps you’re using a new piece of equipment or software, or you’re in a totally new studio environment. Maybe you’re working at the edge of your performance envelope—you’re working at a level you’ve not worked at before. Screwing up in a new situation is evidence of growth. It’s good to make mistakes upward. Try to have new and harder problems. That’s growth.

A toddler learns to poop. One problem solved; onto how to mic a drum set. Forward ho!

If you’ve not done something before, there is a much better chance you’ll do it incorrectly. In many cases, the only way to learn the correct way to do something is to screw it up a few times and learn. Anyone with experience has made mistakes to get that experience, and anyone who tells you, “Don’t do that, do this instead,” has, in fact, done exactly the thing they’re telling you not to do.

A long time ago I was recording vocal tracks at a studio in Queens. It was one of my first times as the lead engineer, and one of my first times working with an assistant. She was doing the punch-ins—they were, for the most part, easy. I noticed she was resting her finger on the RECORD button, and for this particular tape deck, I knew this was a bad idea. From experience, I learned that even the slightest twitch on that button could pop the deck into record, so I made it a habit to never get my finger near that damn button until I was close to the punch point.

I said to the assistant, “Don’t do that. You’ll twitch and put the deck in record and erase something important. Put your finger somewhere else."

She was a new assistant, and sometimes people new to things don’t fucking listen. And sometimes people have something to prove... two minutes later she twitched the deck into record and took out two seconds of a vocal part that was really, really hard for the singer to nail. And I was PISSED. I took over the deck remote, banished the assistant from the control room, and made her clean the bathrooms, vacuum the lounge—all the stuff an intern would do.

She handled it wrong. She should have listened to me, obviously. But also, she was new to being an assistant. She didn’t have enough experience with that deck. She hadn't screwed up a punch until my session.

But there we both were, making new mistakes we hadn’t made before. She was assisting on a session, finally. I was engineering the first album I’d ever produce. We were both moving up and screwing up at new and better things.

And for me, the screwing up continued throughout my producing and engineering days. Now I’m screwing up on new and different things, from parenting to email campaigns.

So, keep screwing up. Take responsibility when you do. Learn from it then move on to the next new screw-up. That is what I’ll be doing for the rest of the day! Week! Month! Year! Life!