A really useful mixing trick for snare drums using two instances of the Micro Digital Reverberator. This one is courtesy of Dan Korneff.
Luke DeLalio 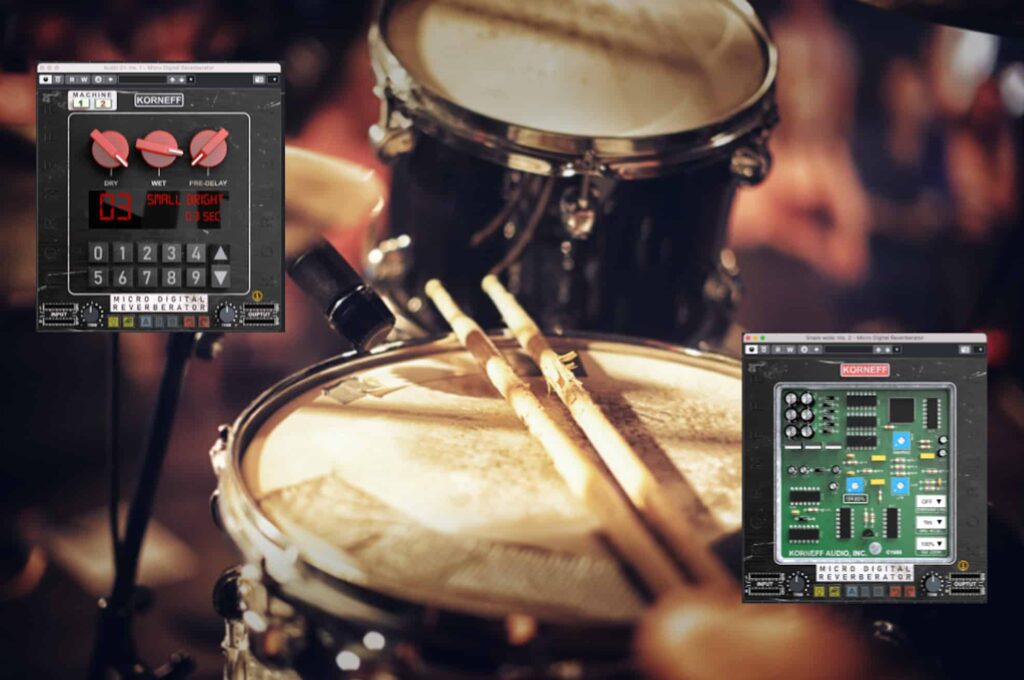 The other day on our Discord channel, Dan Korneff shared a snare drum trick that uses the Korneff Audio Micro Digital Reverberator.

Dan is well-known for his hard hitting, articulate drum and snare sounds. Not many producers/engineers have snare sounds that are considered iconic, but Dan does—search "Paramore Riot snare” on Gearspace - multiple threads come up.

His MDR snare trick is easy and gives you a lot of control over the size of the snare and how it sits in the stereo field.

What you're going to do is set up two different MDRs. One we’ll call the Fatter, the other we’ll call the Wider. Together, they’ll make your snare fatter and wider. Think of it as drinking beer and sitting around with no exercise all day for the snare.

Start by dropping a Micro Digital Reverberator instance on the snare channel, or on the snare bus if you are combining multiple snare sources together. Do this by placing the MDR in an insert location, after any other processing on the channel.

Switch the MDR over to Machine 2, and bring up program 03 Small Bright 0.3 Sec. Set DRY all the way to the right, and bring down WET to around 2:00. You want to pass all of the snare through the MDR, and then add the effect back in.

03 Small Bright 0.3 Sec has a timbre similar to that of a tight drum booth or a small, highly reflective room. The very short time of this patch means that it will sound more like a doubling than a discrete reverb. It will thicken the snare up and make it last a little longer.

Press the Korneff nameplate to switch the MDR to the back side so you can tweak the circuit. Locate the blue trimpot to the left—it’s labeled WIDTH. Turn this all the way counterclockwise to 0%. This will make the the wet signal mono, so even if you’ve got a stereo snare track (for some reason), the effect will be confined tightly. This reinforces the snare’s solidity in the sound field. 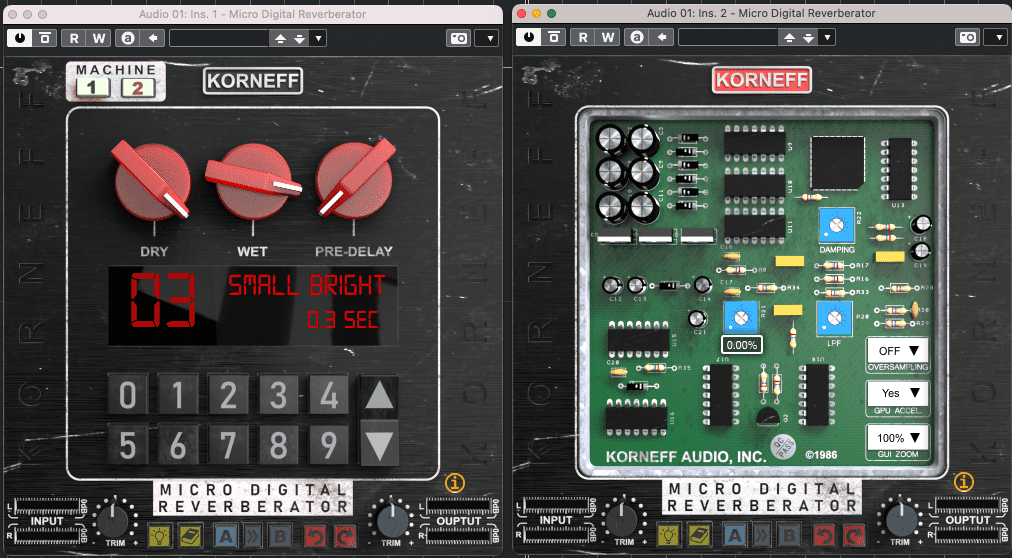 A fresh instance on the MDR will come up set to Machine 1, program Large 1. This is not a coincidence—the plug-in’s default is the patch Dan uses the most, and it’s perfect for this application. Large 1 is dark and has a decay time of around .6 seconds and sounds like a big studio live room that has been damped down to control flutter and ring. It has a noticeable slap to it. To my ear, it has a “cannon" sort of effect on a snare.

Flip around to the back of the MDR and set the WIDTH trimpot to 100%. We want this as wide as possible to wrap that ambience around us a bit. 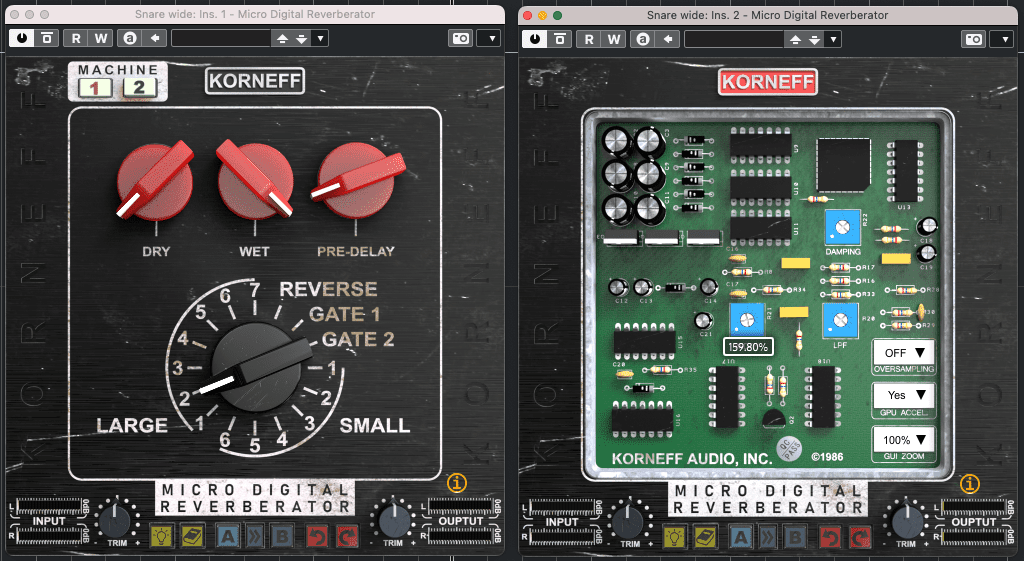 Depending on the genre of music and the density of your mix, you’ll have to adjust the settings a bit, and this is where the PRE-DELAY control on the front comes in really handy.

PRE-DELAY delays the onset of the effect. At low settings it is hard to hear, and as you turn it up you’ll increase the separation between the dry signal and the wet signal. Below 40ms, the dry and the wet will sound cohesive, but once you get higher than 40ms, the two signals will separate and your ear will hear them as two clearly different events. Very high settings will give a slapjack like effect and start to add an additional rhythmic component to your mix. You may or may not want that.

On the Fatter MDR, the one set to Machine 2,, as you adjust the PRE-DELAY the sound of the snare will brighten. Turn up the WET control to increase the size of the snare. To my ear, turning up WET seems to increase how hard the drummer is hitting. Seriously, even if you’re not using the wider portion of this trick, it’s a good thing to slap an MDR with this patch on your snare always. In a weird way it is doing the work of both a compressor and an EQ but in a much subtler way.

PRE-DELAY and the level of the return on the Wider MDR (the one set to Machine 1), has a lot of effect on the location of the snare from front to back in your stereo space. By messing with level and PRE-DLAY you can “move” the snare back or forward in relation to the rest of the drum set. Too much effect can make the snare sound like it was recorded in a completely different space than the other drums, and this might be an effect you’re going for. I usually want my drums to sound integrated and cohesive, so I’ll set Wider so that snare plays nicely with the rest of the mix.

Feel free to use different programs on the MDR and experiment a bit. In general, though, the trick works best with smaller spaces on the Fatter, and larger spaces on the Wider.

I usually feed a little of the hi-hat into the Wider using the effects send. Huge, distant snares with small, dry hi-hats sound goofy to me. I like these two instruments appearing like they at least know each other and not like they’re meeting each other for the first time on a Tinder date.

You might want to think about automating the Wider return. In general, you should be automating your reverb returns, almost “riding” them like any other instrument in your mix. In spots where you want the snare to be prominent, ride the return up, in places where things need to be tightened and tucked in a bit, pull the return down. I especially like bringing reverbs up during fade-outs, so it sounds like the song is fading away into space rather than simply getting quieter.

See You On Discord

This blog was inspired by a question that came up on our Discord channel. Thanks to Mistawalk! Dan and I monitor our Discord, and we definitely answer questions and give out ideas and tricks all the time on it, so hit up our Discord. And our Facebook. We’ll help you out however we can.