This is the Ultimate Audio Treasure, in terms of knowledge. If you get this stuff you can solve any audio recording situation or problem. Knowing this will improve everything.
Luke DeLalio 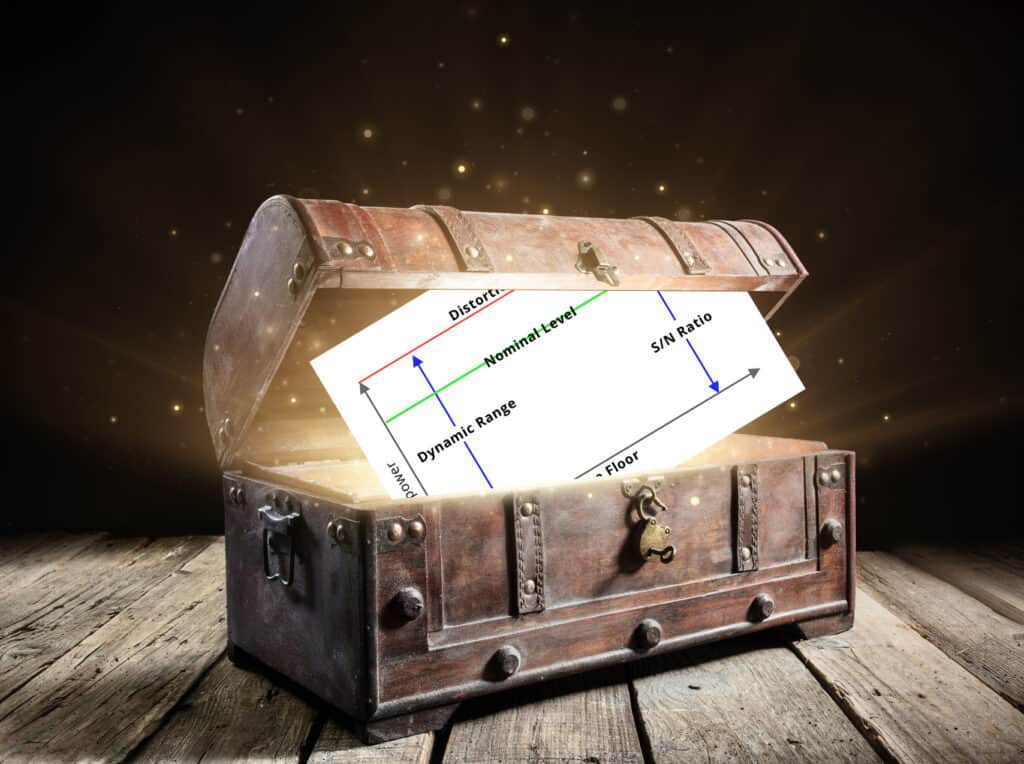 Let’s put the whole thing together today. How Noise, Distortion and signal level all fit together. How it all works.

All devices in audio - from a human voice to a mic to a preamp to a converter to a console to a power amp to a speaker to a human ear, all have a lower limit and an upper limit.

The lower limit is self-noise, the noise floor.

So, that is the playing field in audio - from the Noise Floor to the Distortion Point. And we call that area the DYNAMIC RANGE.

Dynamic range can be huge. Your ear has a dynamic range of maybe 180 dB. You can hear from an ant picking its nose to something as loud as a gunshot about a foot from your head. Truly, though, if you’re listing to things ON PURPOSE and without HEARING PROTECTION louder than 112 dB you’re crazy. We will, of course, talk about dB later... much later...

HOW TO SET LEVELS BADLY

Let’s learn how to be a shitty engineer quickly..

Now, common sense would suggest you set the levels as high as possible. Especially when analog recording, the idea was to hit the tape very hard, making sure most of your signal was way above the noise floor, so the only time you’d hear hiss was when the song was very quiet, like at the beginning or the ending. So, let’s just do that, set everything right below distortion:

Notice the noise floor going up? Congratulations, shitty engineer! You’ve lost all the quiet stuff in the noise! By the time it hits the radio you can’t even hear the fadeout of the song and the hiss and noise has gotten really loud. Get fired by the band!

Let’s do the opposite. Let’s set the levels so that we DON’T loose all the quiet stuff. We'll keep our signal as far above noise floor as possible...

Now you see the dynamic range squashing down and clipping the wave form, adding harmonic distortion. You lose again! Now your recording is distorted from almost the moment things begin, and it just gets worse and worse... Shitty engineer, nicely done. Fired by band. Work for uncle loading boxes.

We need to find a place within the dynamic range to set our levels so we avoid being a shitty engineer. Let’s reason this out.

Ok, we do want levels as high as possible, because noise sucks. But what if something unexpected happens? If we set a mic preamp level to right under distortion, and then the vocalist moves in a little closer to the mic, or sings a tiny bit louder, the increase in power can clip the mic preamp, and you’ll hear distortion. So, we need a little bit of safety margin up there so we have some room in case something gets unexpectedly loud. That’s HEADROOM.

Headroom. If you bump your head there’s clipping...

What are typical headroom figures? It’s all over the place. On analog tape decks we were usually recording to give ourselves about 9 dB of headroom on the tape. Mic preamps usually have very good headroom - from 18 dB to 26 dB or even higher. Like dynamic range, it’s variable and depends on the type of gear and the manufacturer, and the engineer.

We want to set our levels as high as possible to keep our S/N (Signal to Noise) ratio as high as possible. And we don’t want to clip, so we’re going to give ourselves a little room on top - headroom. We call this level NOMINAL LEVEL.

What usually happens is we have the musician play or sing, and we watch the meters and listen, and we set the level so that we have some headroom just in case. It’s sort of an average, pretty high level. It’s different for different types of gear, and it's usually determined by the manufacturer. The signal won’t sit exactly at nominal level the whole time, because when recording or live mixing, the signal (the band, the vocal, the drums, etc.) will go up and down, depending on the dynamics of the player and the song. But there is pretty much a consistency to everything, right? Shit’s not usually really loud and then really quiet unless the players suck or it’s some sort of avant-gard weird ass thing happening musically.

Dynamic Range is from Noise Floor to Distortion Point.

Signal to Noise Ratio is from Noise floor to Nominal.

Headroom is from Nominal to Distortion Point.

You use meters and common sense. And experience.

HOW TO SET LEVELS CORRECTLY

Notice that we’re reducing the dynamic range from both the top and the bottom. Instead of letting our signals go beyond the distortion point or below the noise floor, we’re controlling things. We’re controlling the dynamic range of the signal across the signal chain. That sounds like compression doesn’t it? And yes, that is certainly part of what is going on. But there is also recording technique involved to make sure all the pieces of gear fit together in the best way possible for the signal.

That’s GAIN STAGING. More on that at a later date!

OK! It’s been a pretty long slog through this stuff, but hopefully you’re a bit clearer on it all. I can be confusing, and usually when I explain it I can wave my arms around and demonstrate stuff and it makes more sense and I look like a nut.

I can’t emphasize how important knowing that diagram - Dynamic Range with Nominal in the Middle, is. If you can hold that diagram in your head while you’re setting up gear and getting your levels, your recordings will improve immensely. I want you all to be great engineers.